Courtesy of the National Portrait Gallery

You may be aware that just before William Cavendish, the 5th Duke of Devonshire married Georgiana Spencer in 1774 he had had a relationship with a Charlotte Spencer (no relation to Georgiana) and that as a result of this liaison a child was born. This child being named Charlotte, after her mother and Williams after her father, but not until her mother had died in 1781.

During the early part of her life she was provided for by the Duke but raised by her mother, a milliner, until she died. At this point Charlotte was taken into the Cavendish household and lived with him and his wife Georgiana as an ‘orphaned member of the Spencer family’. Georgiana always treated Charlotte as if she were her own child. 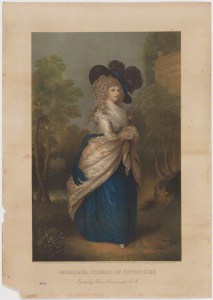 Courtesy of the National Portrait Gallery

Everything went well until Charlotte acquired a new governess…

High Spirits: The Comic Art of Thomas Rowlandson an exhibition from the Royal Collection at the Holbourne Museum, Bath

The History of Love 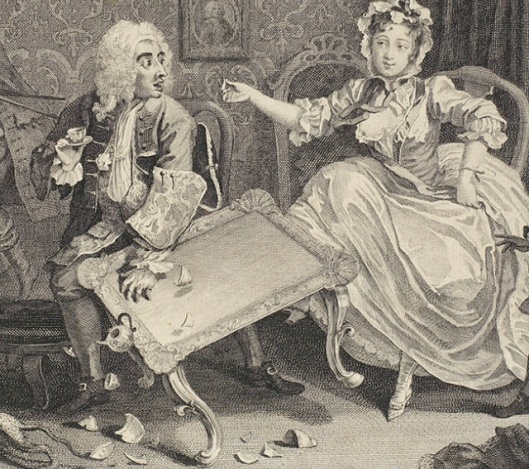 In eighteenth-century England, there were many reasons why families might have been torn apart, or why dutiful wives and hardworking husbands could suffer a fall from grace. Heart-rending tales of orphaned children, abandoned lovers and destitution fill the pages of contemporary newspaper columns and court records. For some, one of the prime suspects behind the nation’s idleness and debauchery was quietly, steadily taking root in almost every street in the country.

This terrible foreign invader encouraged young men to stay “a lurking in the bed” rather than earning an honest wage. It turned women to harlotry and insolence, caused atrocious child neglect, and was armed to carry everyone off to their grave a decade early. This enemy of virtue? Why, tea, of course.

I regularly walk along New Walk beside the River Ouse in York.  It is hard to imagine this as the elegant walk that became popular during the Eighteenth Century (although it did have a reputation for some of the century as also being the location for washing being hung out to dry on the bushes and for nude bathing!) because of the muddy green swathes under the trees – that are frequented by a variety of birds and lots of squirrels – and the large car park that is St George’s Field which in the Middle Ages was the site, I understand, for archery practice on Sundays. 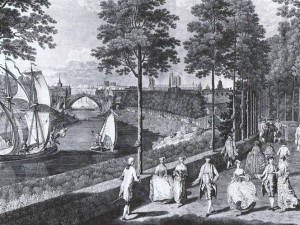 However, an incident occurred in 1797 which would not be out of place in a romantic novel – although the outcome was hardly a happy one.

Lt-Colonel Byran Bell and Surgeon George Crigan, both of the 46th Foot, met on Sunday 11 June 1797 to settle an argument of over a year’s standing.  The two gentlemen were stationed on Martinque when Crigan alleged that he had visited Bell (then commanding officer) at his lodging to enquire if the birds’ eggs had hatched for there was a bird’s nest on the window ledge. Apparently Bell then said “You must either be drunk or mad! get out of the room!” – which in fairness does seem to be a reasonable response given the evidence presented.

To us today this remark seems a ludicrous reason for a fight but George Crigan saw this as a “serious thing for a young man to have his character blown upon”.

Despite the activity of Captains William Forster (also of the 46th) the duel went ahead and Crigan was killed “with a leaden ball”.  Forster, Bell and his servant Owen Evans (who had attended Crigan during the lead up to the duel – this in itself being seen as an insult because of his lowly occupation of labourer) together with the attending surgeon, Bedford Ireland were charged with Crigan’s murder.

The trial took place at the Guildhall in York on 31 July 1797 before Baron Thompson (probably the judge who preceded at trials against members of the Luddite movement a few years later).

Whilst Forster and Evans were found not guilty Lt-Colonel Bell was adjudged guilty of manslaughter and fined the princely sum of Six Shilling and Eight Pence with one month in prison.  Subsequently, he was court martialled and told that he should not expect later promotion.  Bell resigned his commission in 1798 and died in 1810.

Several factors are clear from this (over and above the lenient sentence handed down – after all Bell was probably more proficient with fire arms than the regiment’s surgeon).

One was Crigan’s personality.  Whilst the regiment was stationed in Poole, Dorset a few months prior to the duel, he approached a new Captain, James Kingston, and asked Kingston to stand his second when the time was right.  The captain was horrified and asked Crigan to give up his long standing resentment but the surgeon would have none of it.  Was it possible, therefore, that whilst the apparent reason for the argument appears ridiculous that this was in fact the final straw?  Could it be that Bell and Crigan had been at loggerheads about other factors now unknown to us?

It is apparent from other military sources that a few months after his guilty was declared Bell was involved in another court martial, in Colchester, of a Lt-Colonel of the 46th Foot, Baldwin Leighton, who he alleged had acted in a manner unbecoming of an officer in His Majesty’s army, that he countermanded orders Bell had given Forster (who was the regiment’s Paymaster) and for ignoring seditious and disrespectful utterances made in his presence.  In all there were eight charges against Leighton for his actions in the West Indies in the year 1795.  Interestingly, Bell alleged that Leighton was guilty of neglect of duty by failing to prevent the duel with Crigan – indeed, he had actually encouraged the challenge.

The court martial on this occasion found the accused not guilty of misbehaviour and Leighton was honourably acquitted.  As for Bell the court said that his motives should be investigated as his charges had been “groundless and vexatious – a conduct in its tendency, destructive of military discipline and subordination.”

The outcome of this court martial quite probably was the reason for Bell’s resignation.

In his defence Bell claimed that he was laid low at the time Surgeon Crigan stated he made the fateful visit.  As the events took place in the West Indies it is quite likely that Bell could have been suffering from a malady that could have been attributed to conditions in the islands at that time.  However, surely he could have produced evidence of this – unless the suggestion is that as regimental surgeon George Crigan did not record the commanding officer’s affliction.  Could it be, therefore, that either Bell or Crigan were drunk when the visit was made?

Was Lt-Colonel Bell unfortunate or was his behaviour unacceptable even to the leaders of the Eighteenth Century military?

Perhaps one day these questions might be answered if not this duel goes down as one with the most ridiculous origins!

“A collection of the charges, opinions, and sentences of general courts martial by authority:  from year 1795 to the present time”

Last year, many of us followed with great interest and amusement the heated debate on “did they have gavels or not in the 18th century” in the Guardian, followed by the Great Hanged or Hung Controversy of 2010.

This year, however, the gloves are off. Thomas Erskine’s honour is at stake.

This series has not only stolen his [Erskine’s] achievements and given them to a man who was, in truth, a nasty piece of work, but has presumably made it impossible for television to make a programme celebrating Erskine as he deserves. The BBCshould be ashamed.

It was a travesty. The heroic defender who secured Hadfield’s acquittal was not Garrow, but Thomas Erskine. (…)

The BBC’s charter and its producers’ guidelines say…

Perhaps a new programme for the BBC?

I’m definitely going next year (!) especially if there is something extra-special in remembrance of the Battle of Waterloo.

World of the Marchioness

World of the Marchioness

Living life on the fringes of London

Sharing the History of Everyday Fashions

Come Step Back In Time

Discover a passion for history....

History, Folkore and the Supernatural

Cooking in the Archives

The History of Love

Author of Historical Fiction and Nonfiction

Ellen And Jim Have A Blog, Two

To know what you prefer, instead of humbly saying Amen to what the world tells you you ought to prefer, is to have kept your soul alive — RL Stevenson: a blog on books, films, art, music, culture

The Cookbook of Unknown Ladies